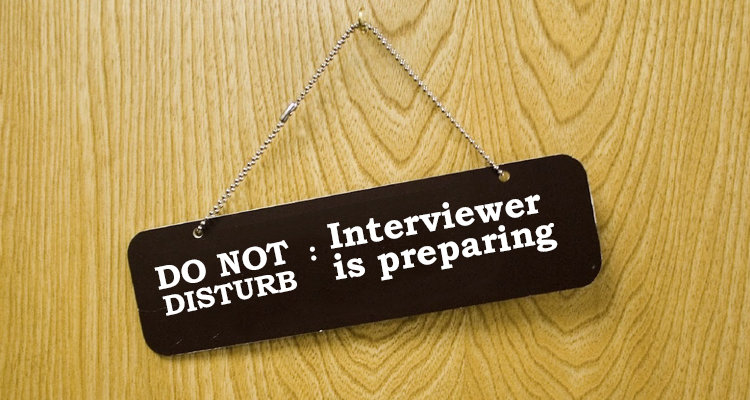 It is usually the candidate whose pulse rate goes up sky rocketing before an interview.

The impulsive feel of the need to prepare with whatever skills are required to face the interview creeps up. Interviewers also equally expect a minimal preparation from candidates.

However, seldom do interviewers give importance to their own preparation in order to conduct a productive interview.

Interview is a crucial indicator of a candidate’s personality. Interviewers think they can gauge the potential of candidates comfortably but end up understanding only 60-70% of them. The remaining 30-40% could be highly crucial to arrive at the right decision.

However prepared the candidates could be for an interview and they downplay any of their negative traits, the natural characteristics would pop up at instances in the interview without their knowledge. These are a few of those things that an interviewer also needs to pay attention to.

“An interview, especially in-person is a very important part of a recruitment decision making process”, says Mr. Ram, a chief strategy consultant. He further goes onto quote an incident where the HR department referred to a candidate who was subsequently interviewed over phone and video calls for a Sales position. The candidate was accredited with lauds from the interviewers for the fluent multilingual communication. However, Mr. Ram emphasized on an interview – in person. The resulting action post the interview was the candidate’s rejection. “The reason was that the candidate failed to prove in one language – the body language which is highly essential for a sales role”, he says.

Preparing for conduction of an interview includes thoroughly understanding the associated primary requirements in addition to direct/main ones.

Culture fit is an associated primary requirement. This is of high relevance in the present days because we live in a majorly diversified cultural environment setup. Work environments are sensitive to cultural variations and best fits can help avoid any unexpected disturbance that pose a threat to reduce productivity from mild to major intensities.

Introducing at the beginning is beneficial. Interviewers need to prepare for this as they should not be sounding too dominant that could make the candidates uncomfortable. Limiting self-introduction to relevant points and at the same time, not conveying too less, is important. An ideal introduction will help the candidates understand what points should be stressed upon to convey how he/she could match with the interviewer’s requirement.

Evaluation of applicant’s profile should be performed carefully to realize the candidate’s strengths & weaknesses hidden behind the content in the resume and questions planned accordingly will yield better insights. 65% of recruiters say they look for errors in resumes like spelling mistakes and grammatical inaccuracies to filter out contenders in the first level when loaded with plenty of resumes.

Being updated with company news is vital. As an employee of an organization, one tends to get engrossed in the work alone and ignores petite updates on the company’s news at times. Interviewees on the other hand acquire a lot of information online before the interviews. If the candidates refer to
any of those recent media updates during the interview and the interviewer is unaware of it, it is certainly an awkward moment. Being careful in these aspects can help avoid such embarrassing situations.

Keeping ample time to interview is advisable. Over 30% of interviews are conducted in a hurry and decisions made in such conditions could be unfavourable in most cases. Saving ample time for an interview could be a challenge in work schedules. However, if it is not given priority, it could lead to wasting more time in due course with an unfit hire.

3 thoughts on “Why interviewers should prepare to interview!?!”